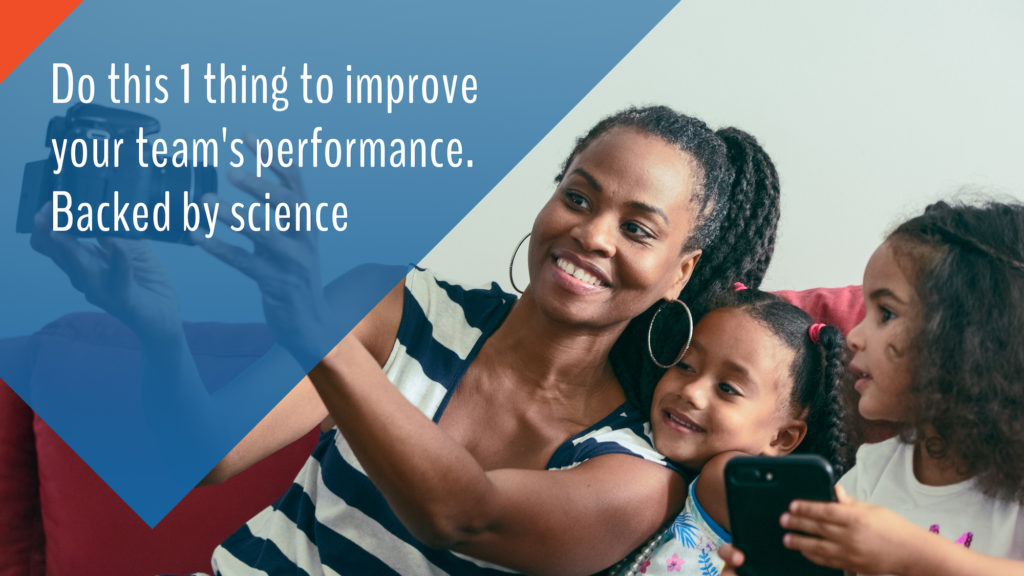 You have the power to transform every person on your team into a high-performer. It doesn’t require you to spend money on expensive training programs. And you don’t have to bust your budget to pay top dollar to recruit “the best and brightest” talent either.

Building a high-performing team is essential to grow a business that doesn’t rely on you to do everything.

But with so many tasks to manage, many entrepreneurs struggle with how to get and keep high-quality people doing the work.

The good news is, science says there is one thing you can do that will significantly improve the performance of the people you already have: in them.

Your view your team becomes a self-fulfilling prophecy

Research shows that people will live up to your level of belief in them.

If you see your team as high potential contributors who can help advance your business, they will rise to the occasion and do that.

But if you view them as average performers with limited abilities, they will embody that standard as well.

In one foundational study in this area, teachers were told at the beginning of the year that twenty percent of their students were “bloomers” based upon results of an intelligence test.

At the end of the school year, the students labeled “bloomers” outperformed their peers in both verbal and reasoning ability. They also achieved more than 50% intelligence gains during the course of the year.

The twist in the research lies in that the students labeled “bloomers” did not score higher than their peers on the original intelligence test.

The only difference between the students labeled “bloomers” and the others was what the teacher believed about them.

Because the teacher felt like they had potential and the ability to achieve, they provided additional support, encouragement, and pushed them to grow beyond their perceived limits.

The added belief and support from their teachers fueled the students to grow into their potential.

Research from Carol Dweck supports this as well:

Your level of belief in the potential of your team empowers them to achieve.

Smart leaders know this. That’s why it’s no coincidence that some are able to consistently build high-performing teams, whether they handpick the members or not.

That’s because they’ve developed the habit of believing in every person that comes under their care.

The data continues to support this as truth. And it plays out in the classroom, with your kids, on sports teams, and in professional work environments as well.

The way you lead your team has far reaching effects

I’ve personally experienced and witnessed what the power of having someone believe in you can do.

At orientation for the 5-year MBA program at Florida A&M University, my freshman class was promptly told we were all superstars and the future leaders of Fortune 500 companies.

Through the course of our curriculum, we rubbed elbows with CEOs and were treated as if our place at the top of the business world was only a matter of time.

The way we dressed reflected our mindset as well. We wore suits around campus in the hot Florida sun, while our peers walked around in shorts.

Planting that “superstar” seed in us worked. People from my class are now mayors, city council members, entrepreneurs, and senior level executives in large companies.

Willie Henry, now a human resources lead at Facebook described the impact of the faculty’s belief in him this way:

“For me it raised my level of confidence and belief that I could compete and win in the game of life and business. It has definitely paid off.”

It increased my confidence and helped me to understand my value and worth. I don’t settle for less and don’t allow people to minimize me and what I bring to the table.

I began to internalize that mindset. Even after I left school, and have held various careers, I walk on the scene like I own it.

Everyone wins when you treat your team like they have unlimited potential, and instill in them the belief that they can soar beyond even their own perceived limitations.

Make it your mission to give every person on your team, contractors, virtual assistants, or full-time employees, the support they need to rise to the potential they have within them.

Through your leadership, you’ll have created a high-performing team that will take your business farther, faster.

PrevPreviousRemarkable customer experiences begin with moments. How to transform even the most common ones
NextGet more word of mouth promotion for your brand with these 2 simple strategiesNext