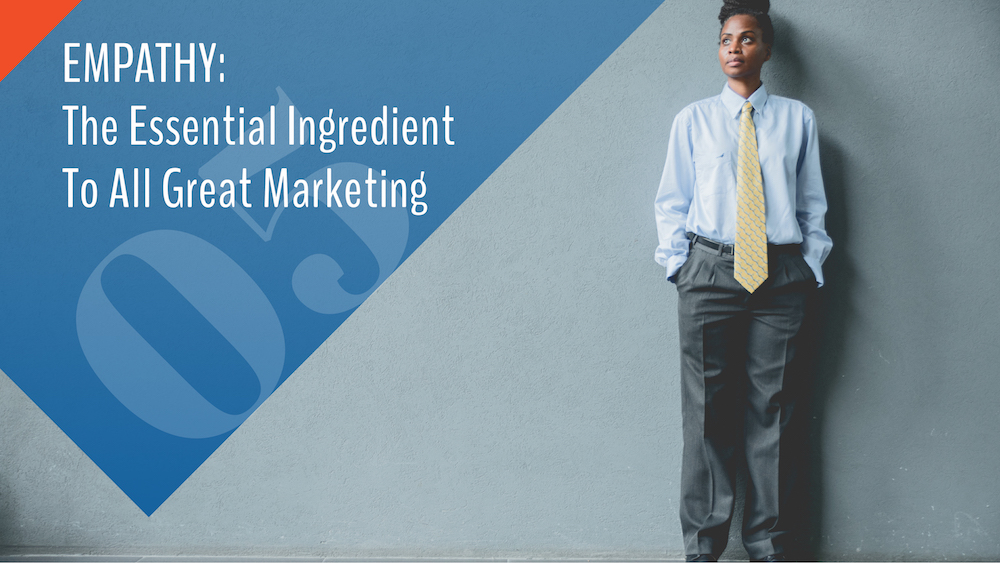 One of the essential skills marketers need to develop is empathy. Unfortunately, as a society, empathy seems to be in short supply.

Last month, I was on a flight that left nearly 90 minutes late. First, there was a problem maintenance had to fix with the plane. After resolving that issue, we had to wait again, because someone got sick and needed to get off the plane. And then we had to wait a little longer for medical equipment to get replaced after it was used on the sick passenger.

Most of the passengers on the plane took everything in stride. But there were plenty who were visibly frustrated and quite vocal about it. The man in the seat in front of me even called the airline to complain about the delays. Empathy was in short supply for the sick woman and the flight crew working to get us to our destination safely.

As we went through the recent supreme court hearings for Brett Kavanaugh, I listened and read many comments from people, often men, who couldn’t understand why a woman who claims she was assaulted would wait so many years to report what happened to her. Empathy was often lacking for assault victims.

And at the end of the summer, there was a major uproar following the U.S. Open Finals when Serena Williams had heated words for the umpire calling the match. Many people balked at her behavior and said she was completely out of line for how she engaged with the umpire.

When I first watched the video clip, I cried. As a black woman, I deeply felt the emotion Serena was expressing because I know what it is like to be working to do your best in your field, only to feel like you’re fighting an uphill battle because you’re treated differently from everyone else.

I couldn’t let go of her words,  “this has happened to me too many times.”

While Williams has won 23 grand slams, the journey has been paved with sexism, racism, and many other slights. Add to all that, the fact that she gets drug tested five times more often than any other athlete in the sport (even though she’s never tested positive), and for me, it is easy to understand the source of her frustration. But for those who are short on empathy, they only focus on condemning a behavior they didn’t agree with.

While these are all examples of incidents happening outside the realm of marketing, they inform how events directly related to marketing play out.

Earlier this year Heineken pulled an add that lacked cultural intelligence. It showed a bartender on a hot summer day sliding a Heineken across a bar to a patron passing several African-Americans before it arrived to the thirsty partygoer. The caption read, “lighter is better,” and outrage ensued because African-Americans have historically been told that their dark skin is not beautiful, and lighter is better.

In their apology, Heineken focused first on their long history of diversity in marketing, then reiterated their opinion of their ad, before acknowledging they missed the mark.

For decades, Heineken has developed diverse marketing that shows there’s more that unites us than divides us.

While we feel the ad is referencing our Heineken Light beer–we missed the mark, are taking the feedback to heart and will use this to influence future campaigns.

Their statement did not address the people who were offended by their imagery, even though for many it conjured up hurtful memories. Their apology lacked empathy.

Contrast that to Dove’s response after backlash about an ad many people felt implied a similar sentiment.

An image we recently posted on Facebook missed the mark in representing women of color thoughtfully. We deeply regret the offense it caused.— Dove (@Dove) October 7, 2017

Their statement did not address the people who were offended by their imagery, even though for many it conjured up hurtful memories. Their apology lacked empathy.

Contrast that to Dove’s response after backlash about an ad many people felt implied a similar sentiment.

Dove later expanded their apology, noting the ad “did not represent the diversity of real beauty which is something Dove is passionate about and is core to our beliefs, and it should not have happened…We apologize deeply and sincerely for the offense that it has caused and do not condone any activity or imagery that insults any audience.”

Their response was much more empathetic, as it showed a regard for the people who were negatively impacted by their marketing.

How to infuse more empathy in your marketing

According to a New York Times report, empathy is a choice. The authors argued that we choose whether or not to extend ourselves to others or to consider things from their point of view. But unfortunately, data shows that empathy isn’t often extended to people who have different cultural backgrounds as you.

Empathy drives so many of our choices, particularly in marketing. Empathy informs design decisions, your photography, product features, line extensions, SKUs, and services offered. Empathy plays a role in every aspect of your customer experience.

And as marketers, choosing to walk a mile in the shoes of others, in particular for customers that don’t fit the traditional definition of mainstream, it can be the difference between making them feel like they belong or not.

The truth is, you can’t engage in inclusive marketing without choosing to be empathetic.

Justin Bariso is the author of EQ Applied, a book about emotional intelligence and how to use it to your advantage. He told me that empathy, which is an important aspect of emotional intelligence, is something that you can develop for someone even if you’ve never directly experienced what they’re going through. Here’s how he advised people should build their empathy muscle:

Try to relate to the feeling another person has, not their experience because even if we had the same experience, we’re going to feel somewhat differently than they did, we’re going to handle things differently than they did. But if someone’s angry, okay, try to understand why are they angry, or try to understand, when have I been angry? Why was I angry? And relate to that feeling. “Okay, so you feel angry. Yeah, I know what it’s like to feel angry.”

During our chat Bariso went on to give a practical example of what this might look like in practice:

As a marketer, empathy must be a core part of your toolkit. Without it, you run the risk of producing marketing that is offensive, excludes others, or comes across as tone deaf.

In a day where empathy seems to be in short supply, those who practice it in their work on a daily basis will get much better results.

This article first appeared on Forbes.