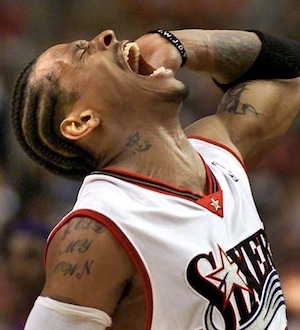 These are just some of the words from Allen Iverson’s now infamous press conference in 2002, where he went on an epic rant after being questioned about his practice habits.

Even though Allen Iverson’s viewpoint was that practice wasn’t nearly as important as the actual game, a growing body of evidence suggests that practice is a supremely major key to success. But not just a bit of practice. A LOT of practice. And the amount of time spent practicing is what separates the mediocre, from the good, from the great.

In his best-selling book Outliers, Malcolm Gladwell put it this way:

Achievement is talent plus preparation. The problem with this view is that the closer psychologists look at the careers of the gifted, the smaller the role innate talent seems to play and the bigger the role preparation seems to play.

He went on further to write:

The idea that excellence at performing a complex task requires a critical minimum level of practice surfaces again and again in studies of expertise. In fact, researchers have settled on what they believe is the magic number for true expertise: ten thousand hours.

No? Then maybe you should re-think how successful you want to be. Consider all the greats, the names we know for being leaps and bounds ahead of their peers: Michael Jordan, Michael Phelps, Beyonce, Bill Gates, and Steve Jobs to name a few. They spent tons of time behind the scenes working on their craft and continually finding ways to be better.

Why is this important for you in building your business? Because if you want to build a business that thrives over the long term, you’ll need to put in the work. Your brilliance alone won’t get you there. You need to put in the countless hours of studying, learning, and applying what you learn to become better and better at it each day.

It doesn’t really matter what it is that you are trying to be great at. The formula remains the same. Ultimately, those who take on the “ain’t got time for practice” mentality, are the ones you’ll be passing on your journey to greatness.

“OK I get it. But what exactly should I be practicing?”

Focus on practicing your core competencies and any supporting tasks that help you be better at them. The more you focus on being even better at doing what you do, the more you’ll grow. But first you have to be disciplined in choosing what you are going to be great at. And then be relentless in your pursuit of achieving that greatness by practicing your craft.

“I’d love to spend time focusing on my craft, but I’ve got a ton of other things to do to run my business.”

You’re right. There are other things that are necessary for you to do to build your business, such as building a strategy, or executing a marketing plan. These things need to be done, but not at the expense of you not practicing and nurturing your core competencies. If you’re in the business of being a writer, it probably won’t serve you well in the long term to spend more time promoting your work than actually investing the time to consistently produce great work.

If you find that after devoting the time to practice your craft, that there isn’t much time for doing a good job at executing other needed activities, enlist others to help you. Just not doing them isn’t a good idea. Nobody said you have to do everything on your own, nor should you try to.

So if you’re a superstar designer, but maybe not the best strategist, make sure you have someone in your network and on your team who is. Then they can handle that task of developing a strategy for you to put you in the best position to have your designs in the hands of your customers.

It’s not necessary (or realistic) for you to be an expert at everything.

For you to build the business that you dream of, it is vitally important that you do what you do better than your peers. And the only way for that to happen consistently over the long term is for you to practice. A lot. That way, when it comes time for the game, “when it actually matters,” you’ll be more than ready to dominate. Because you showed up ready to do just that. Because you practiced.